It’s hard to believe April is almost over and I’m already thinking about planting my garden and getting the pool ready to open.  I mean, where has the time gone?  The last thing I remember before waking up in my cave was the relentless snow and ice that Mother Nature piled on us week after week until we were all forced to buy new winter clothes because we didn’t get what we needed during the holidays!  Now, just yesterday my day lilies were blooming all over the place along with the dandelions and my nemesis, the clover. Arggg!  Like they say though, and don’t ask me who “they” is, April showers bring May flowers.  But beyond the rain showers, April is also the time that is designated as Limb Loss Awareness Month.  Yep, if you didn’t know, the estimated 2 million of us have our own month to help the world better understand what it is like to be an amputee.  So, because we only have 30 days to explain a lifetime of unexplainable hardships and challenges as an amputee, I asked myself what I was going to do this month that would help more people be aware of what it is like to be an amputee.  And after giving it a great amount of thought, I decided I would do nothing. 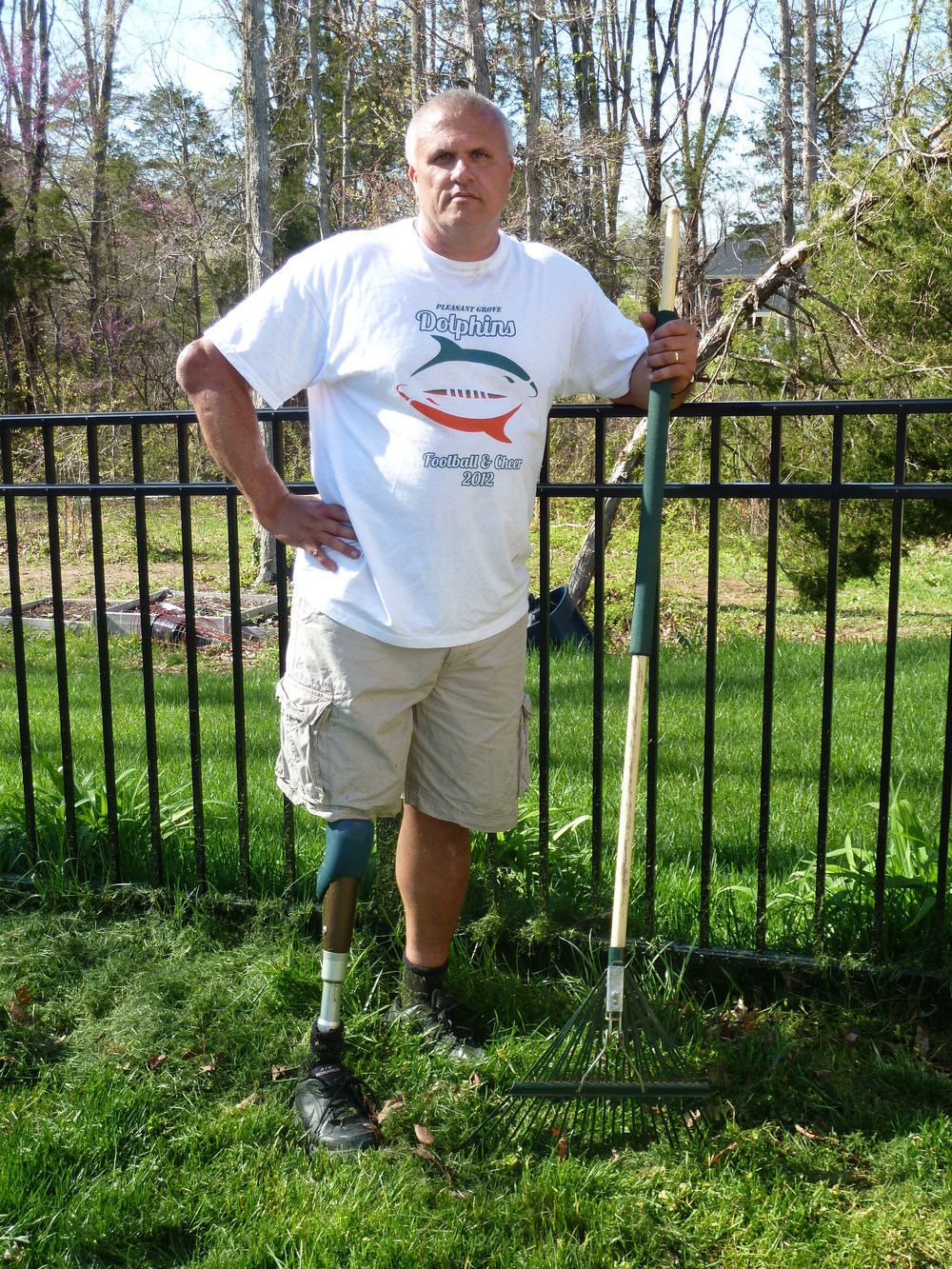 Ok, so before you say (in that voice you use when you’re making fun of someone) that Kevin thinks he’s too good to jump on the awareness bandwagon, let me explain!  What I mean is, I’m going to do nothing different than I ordinarily would do during the other 11 months. Huh, you say?  Well, when it’s warm outside, I’m going to wear my shorts to do yard work and also wear them to go to the hardware store.  I’ll even keep them on when I go get ice cream after a long day out in the yard.  And after I get home, I’ll walk my dogs wearing them!  And when I relax around my fire pit in the cool evenings, I’m going to keep telling one-legged jokes with my family and friends and poke fun of all the hardships I deal with on a daily basis.  You know me, I advocate laughing at life all the time!

And then when I’m out with my family at the mall or in a restaurant, and a small child starts pointing at my leg and loudly asks his mom, who is now hiding under the table, “What happened to that man’s leg?”, I’m going to still take the time to talk to them about it and let them know that my boo-boo hasn’t changed who I am.  And then I might even continue on by saying how everyone has a difference of sort and that we all need to learn to accept people for who they are.  And then if I’m lucky enough to get the green out of my pool before the end of April, I’m going to hop over to the side and do a belly dive in the deep end, all in front of my kid’s friends who see me as a normal guy regardless of how many missing parts I have.  After that, I might keep my prosthetic leg off on a Sunday afternoon in order for my leg to rest and I might even cut the grass on my riding lawn mower that way.  I have been known to do that.  I’ll even wave at the people who are driving around looking at the vacant building lots in my neighborhood.  AND, I might even have my headphones on while drinking a cold beverage and singing aloud, almost as if I don’t let having only one leg bother me!  Like I said, for Limb Loss Awareness Month, I’m going to do nothing different than I do any other time of the year.

You see, in order for a month like Limb Loss Awareness to be effective, all of us as amputees have to be willing to educate the public about our lives to include showing them how it hasn’t changed us one bit from how we were before. Now that to me is awareness!  We can make people aware of all the negative things we deal with on a daily basis or we can make people aware of the fact that, although we are missing arms and legs, we are just people like they are; people who swim in mad circles because we only have one leg — if you’re like me that is!  Now THAT is something I’d advocate awareness about.  So as our month dwindles to a closing, decide how you are going to make people aware.  Are you going to pick the bad or are you going to show them the good.  I know what I’m doing!  Now excuse me while I go clean that pool!  Peace out amp peeps, and until next time, keep hopping.