This blog post is Part 3 of a multi-part series about Dustin’s experience with the Ottobock C-Brace. For more information about C-Brace technology, visit our site, or sign up for a free C-Brace evaluation.

The day rolled around that I was supposed to get my brace. I was excited, to say the least. I was more like a child waiting for Christmas presents. I couldn’t sleep the night before, and I walked, or rather rolled around with a smile on my face the whole morning. When I got to the appointment, Nick, Connie, and Liz greeted me with my brace waiting for me in the other room. They explained everything from how to charge it, change modes, and donning and doffing this brace. I think they just wanted to hold me in suspense just a few more minutes.

Then, I got to try on the C-Brace for the first time. It was much smaller than the big green monster. It was fit for my leg exactly as they said it would be. I tried it on and waited anxiously for them to give me the word to stand up. When that moment came, I stood up immediately. They had me practice sitting and standing, then walking. I was good, but struggling with the walking thing. I couldn’t get it to work like I thought it was supposed to. I was ensured by Liz that I would get it, I just had to trust the brace more. I was thinking trust the brace, but I can’t trust it because it isn’t part of my body. 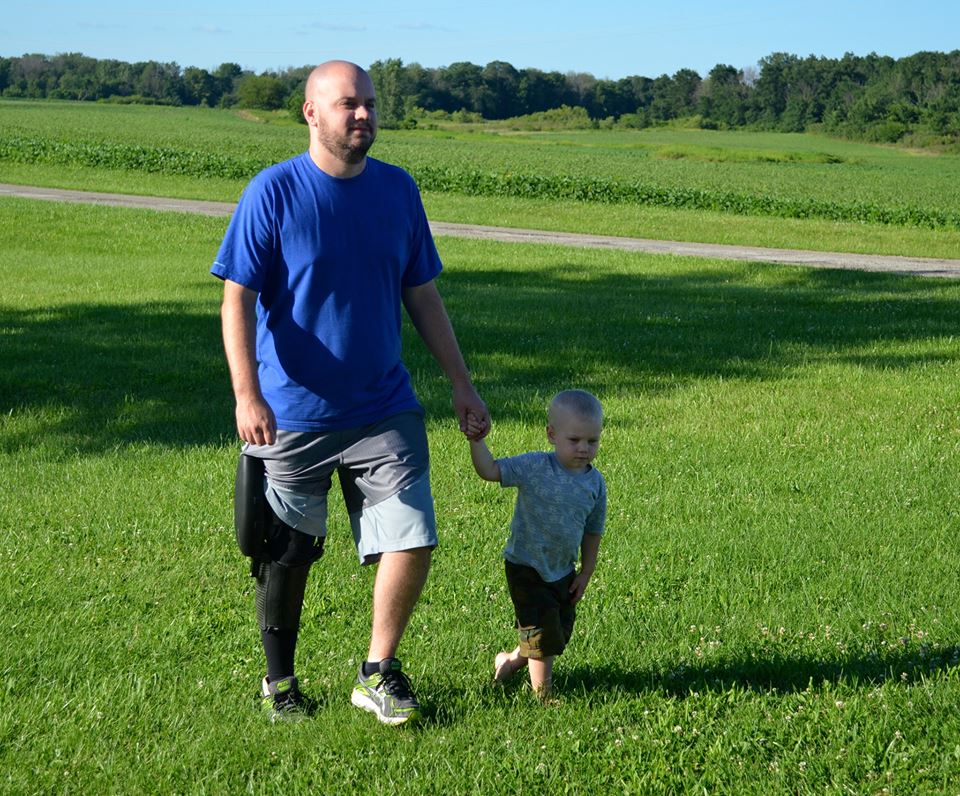 I took Liz’s word for it and put more weight on the brace than I thought I should. Then, the next thing I knew the brace shot my leg out in front of me. I was amazed how well it works when you listen to the people who teach this on a daily basis. It was awesome. I was walking around confidently, only stopping for adjustments, and then back to it. I even went downstairs a few times and upstairs once or twice.

Going upstairs was very difficult and can still be a challenge almost a year later, but much easier than early on. I spent quite a while learning how to walk until I was walking around very easily, which was something I wondered if I would ever do again. My wife stood next to me for the first time in a year. I was so happy she could be here to see me walk again. I was also excited to walk up to my daughter’s school when she got out later that day so she could see me walk.

I was sent home with my brace after thanking Nick, Connie, and Liz for everything they had done for me. It was great to work with such an awesome group of people. It must be very rewarding helping people get back to as much as a normal life as they can—seeing the smiles on people’s faces when they do like me and walk the first time in a long time.

Next, it was time to get my daughter from school. I waited outside the school as I normally would in a wheelchair. This time I stood in the spot where I was usually parked in my chair. She saw me as soon as she walked out the door and walked up with a huge smile on her face looking at my leg. It was going to be a great day.

I walked her home from school, through grass, down a hill. It was so much easier than I thought it would be to learn how to use the C-Brace. I thought to myself how I owe a lot to such a great company as Ottobock, which gave me the chance to walk again next to my kids. That day, we spent a lot of time outside playing, which was fun, but also allowed me to learn how to use the brace. There was a lot of scuffing my foot or the knee not breaking loose like I thought it would. It was all because I didn’t trust it again. I had to remind myself that Liz said to trust the brace. Then, it would work just fine.