To enter the Merry Kruzemas contest to win a free Kimba Kruze for your family, send in a video by December 31st!

A few weeks ago, Ottobock decided to help Santa and give away a chair for families of children with special needs.

Connor and I decided to make the video and fill out the form and then Connor wrote a letter to Santa asking him if he could have his Kruze for Christmas. He also asked for a dog…but that’s a topic for another time.

He was very excited when I told him that we had been chosen to receive it and that we should expect it the week of Christmas.

Well, the box arrived, and I felt like I was going to have to put Connor in his own box so he would stop (trying) to jump up and down. Imagine an 8 year old with not the greatest balance in socks on a wooden floor trying to jump!

We came to the agreement that I would put it together and he could sit at the dining room table and watch me (quietly). He stayed quiet, for a few seconds. But I can’t blame him: we were opening a Christmas present early!

When the box arrived at first I was a little bit intimidated because of the size. My brain immediately flashed back to Christmas last year and having to try to put together a wooden garage with no instructions by street light at 11pm, and the sweat started to bead on my forehead.

Thankfully, after opening the box that fear washed away.

I won’t lie: I’ve never had to put together medical equipment, so the first thing I tried to do was open the chair. It didn’t work.

Thankfully, as I set it down on the wheels, I realized that it had been locked in the close position by a transportation clip.’ 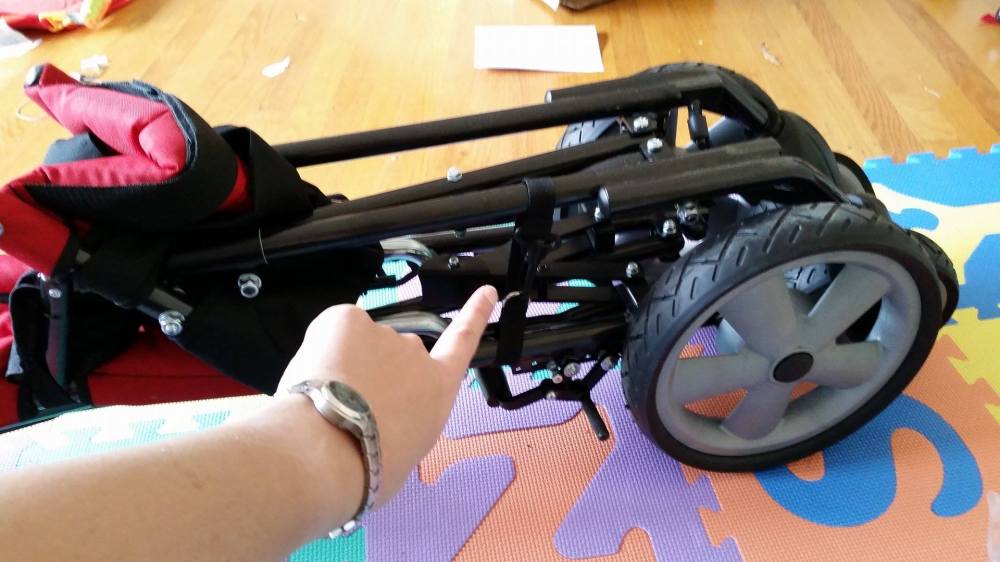 I unlocked it and opened the chair by pushing down with one hand and pulling with the other. It was very simple.

Then I made sure to put the foot brake on so it didn’t roll while I put the rest of the things together.

The next thing I decided to do was to put the arm rest apolstry on. It snapped right together and velcroed close on the side support of the chair. 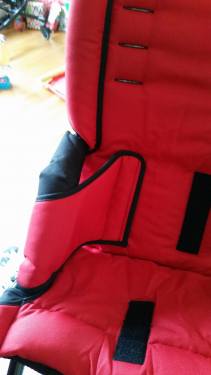 This was easier than I thought… I could put together medical equipment!!

After this, I put the chest harness on the chair. The simple buckles held it right in place.

Then I decided to put the lap belt on. This was a little bit trickier since I didn’t know exactly what piece it was  supposed to run through, but thankfully the elves at Ottobock sent instructions.

Next, I added the comfort side protection. Three pieces of Velcro, and they were on! Very comfortable and fit perfectly.

Next came the sunshade that clipped right into place. And finally: the foot rest.

This was a little bit more of a challenge since I had to hold the locking pin open and push the foot rest into position at the same time. I laid the stroller down to make it easier, but this was the most difficult part for me. 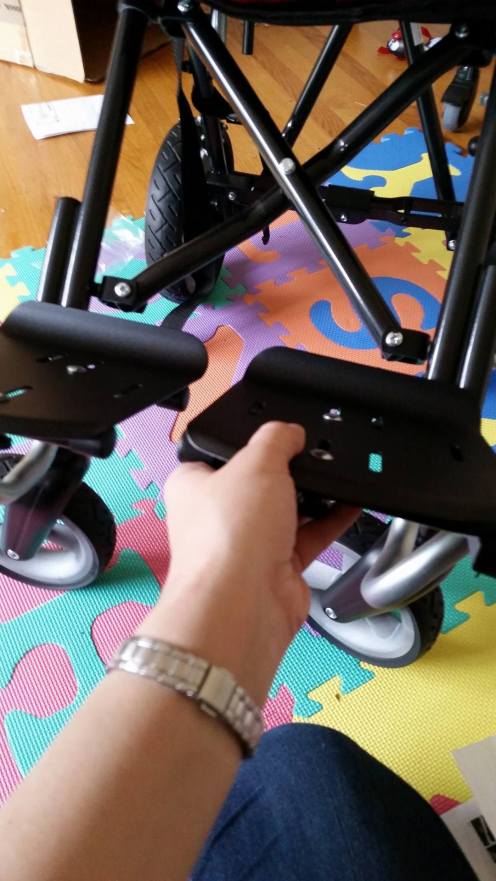 The instructions they sent were very simple, and now we have a lightweight stroller to use when we want to go out all day. Connor was being quite the silly bug when I tried to get a picture of him and kept trying to move around, so this is the best picture I got of him, but overall I am very excited with how simple this was to put together and how easy it is to fold up! It’s lighter than all of the other equipment we have, and I really love that it comes with a sunshade. 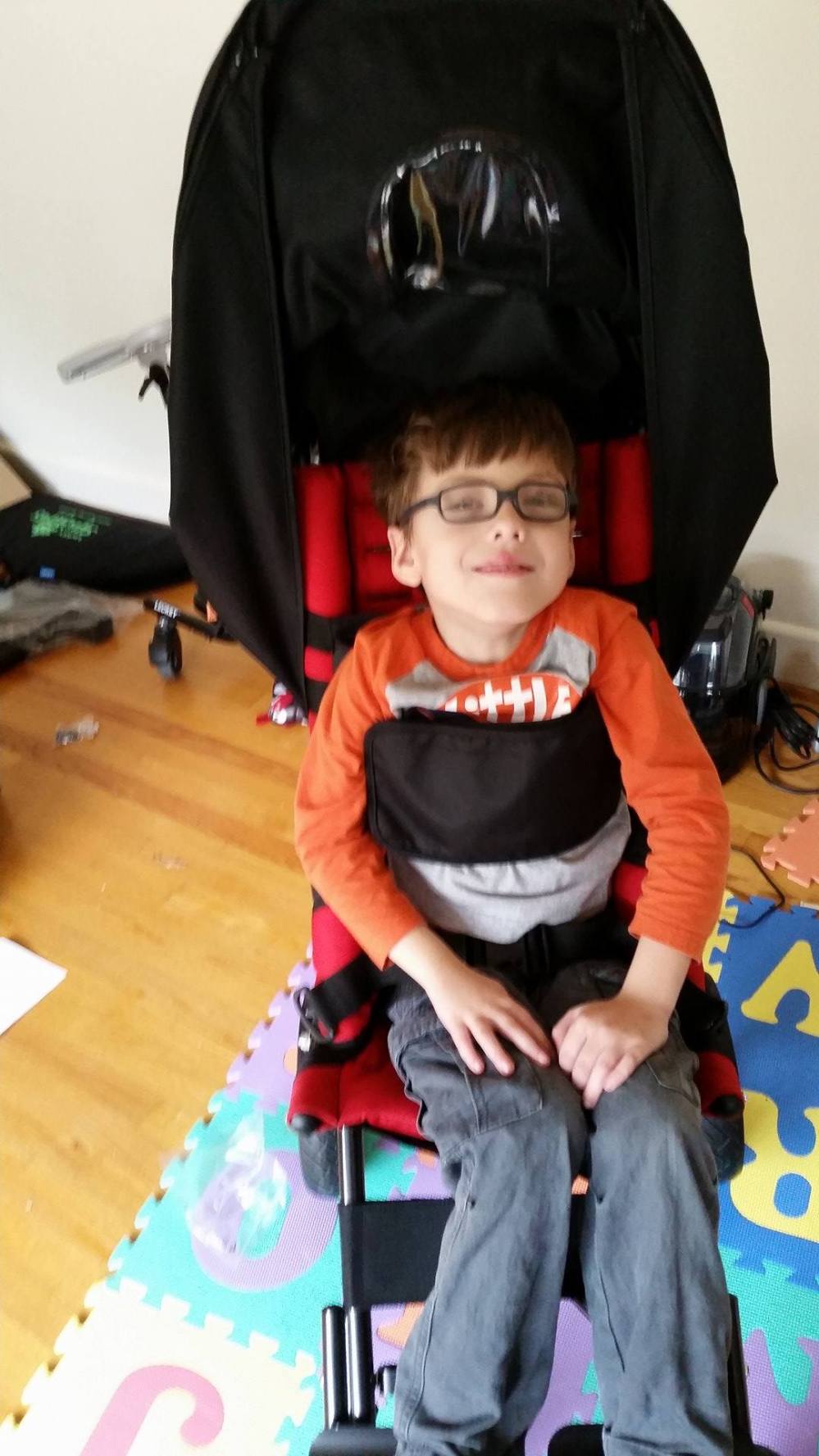 Thank you Ottobock elves for sharing the gift of mobility with us for Christmas!

To enter the Merry Kruzemas contest to win a free Kimba Kruze for your family, send in a video by December 31st!